One Last Look at Tomorrow’s Election 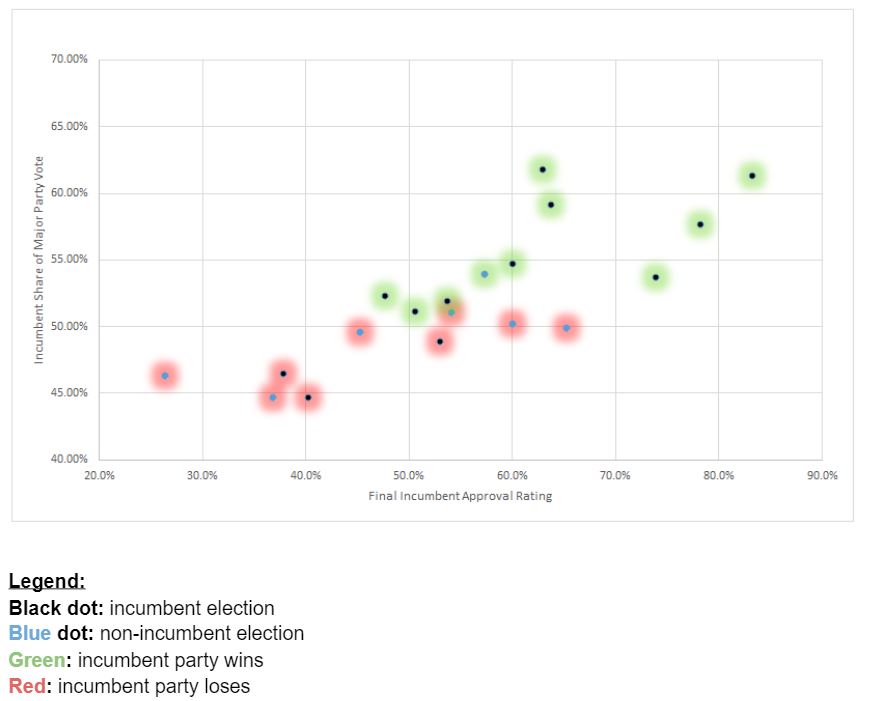 I can’t tell you how many people told me Trump had no chance of winning in 2016—and I believed them. Now it’s hard for me to listen to anyone echoing that message. With so many people paranoid about tomorrow night, it’s worth taking one last look at whether that fear is justified, even if it’s just to make us all get a better night of sleep.

Instead of repeatedly looking to current polling numbers for solace, though, maybe it’s time to dig a little deeper into the past. Analyzing past incumbent elections through a comparison between final approval rating (discounting ‘unsure’ respondents) and share of the electorate (discounting third party voters), the trend is remarkably clear: popular incumbents win, unpopular ones lose.

First, let’s look at unpopular presidents—the category Trump falls into. Other than Truman in 1948, every president with a final approval rating below 50% has lost. That sounds better than it really is (sorry)—that’s only two races out of the twelve incumbent elections in the approval rating era (Bush in ‘92 and Carter in ’80), and two for three doesn’t exactly correlate to a statistical certainty. In reality, though, two for two would be more accurate. The last recorded pre-election approval rating for Truman was June 24th at 47.6% popularity. In the next entry, on January 12th, he jumped to 80.2%. Why? The Berlin Airlift. Most likely, Truman’s approval rating surged long before the election, meaning he probably belongs in our second category of elections: the popular ones.

In the other nine incumbent elections, the sitting president has only lost once. The lowest approval rating of the winners: H.W. Bush at 50.5%. Trump is barely cracking 43%. The one loser was Ford in 1976, and once again there’s a pretty good explanation. Even though Ford was personally popular at the time, his party wasn’t. Voters were infuriated over Watergate, and even with Nixon’s resignation, people were probably ready for a change (not to mention Ford’s pardon of Nixon). Assuming the explanations for Truman and Ford, suddenly approval rating seems like a pretty good indicator for incumbent elections (12/12). But can we really rely on that in the world of Trumpian politics; where does 2016 fall into this?

Surprisingly, last election is not even an outsider. First, it’s important to note that it wasn’t an incumbent election, meaning Obama’s approval rating wasn’t necessarily reflective of the public perception of Clinton (who was not exactly a fan favorite among the electorate). His last approval rating before election day had him at 54.1%, while Clinton’s portion of the popular vote was about 51.1%. Looking at other non-incumbent elections, this marginal change is actually a bit of an anomaly—but in the other direction. Other presidents with favorable approval ratings entering the election (Clinton in 2000 with 60.0%, Reagan in 1988 with 57.3%, and Eisenhower with 65.2%) all saw much larger dips in vote share (-9.7%, -3.4%, and -15.3% respectively) as opposed to Clinton’s (-3.0%). The difference in these changes can almost certainly be attributed to partisanship. Almost inevitably, elections are close because the vast majority of voters refuse to flip. Once again, the empirical trend backs this up strongly. Every single president with a final approval rating below 51% has outperformed in voter share and every one over 52% has underperformed (non-incumbent included). Trump wasn’t some electoral magician who deserved to sweep the country by surprise—he was lucky and came into politics at the right time. There’s certainly no reason to expect him to make an unprecedented comeback this year.

Barring disaster for the Dems, it seems unlikely Trump will have the votes to win the electoral college tomorrow. But that’s not to say there’s nothing to worry about. There are other, very real, outside dangers to the election’s result: voter suppression and Trump contesting a loss. So while it’s hard to see a repeat of 2016 coming on election day, we might have to wait until January 20th to collectively take a sigh of relief.