All Sole, No Soul: An Examination of Disability and Fashion 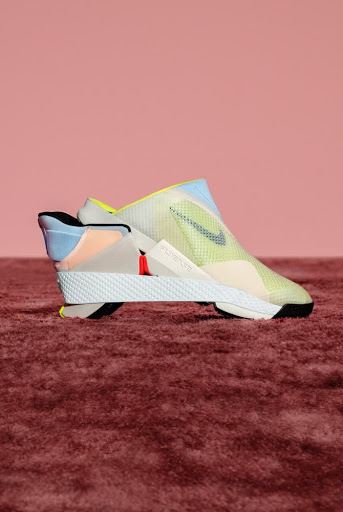 Earlier this year, Nike announced the GO FlyEase. Instead of laces or velcro, the shoe opens and closes on a hinge – you simply step in, push down, and you’re ready to go. The GO FlyEase comes in a single color pallet, composed of bright greens, yellows, and white, and features a sleek, aerodynamic design. However, its design isn’t particularly noticeable or out of the ordinary – pretty shoes are released almost weekly. What makes the GO FlyEase stand out is its unique, accessible design. While there are many slip-on shoes, the GO FlyEase went viral on social media for being the first sneakers designed for both activity and ease of use. For those who have trouble manipulating small clasps or shoelaces, such as people who’ve suffered a stroke or have impaired fine motor skills, shoes that are both easy to put on and functional for activities are rare.

However, despite having several designers of the GO FlyEase speak out about how they were proud of the publicity the shoe had gotten, the webpage for the shoe noticeably included none of this. There was no mention of accessibility or disability, only vague statements about innovation and movement. A few weeks ago, when Nike announced the shoe would be limited edition, a departure from previous sales announcements, it became slightly more clear why Nike had been so vague: the allure of limited edition, combined with good publicity formed the ultimate advertising campaign. The shoe sold out in hours and is now being resold at incredibly high markups, much to the disappointment of actual disabled people. Gabriel Riazi, the husband of a stroke survivor, described his frustration with Nike, saying “They’re using disability to sell to the masses while not giving those with disability the first access.”

It’s unclear whether the shoe was designed with disability in mind. Nothing on Nike’s website indicates that the shoe was ever meant for people with limited mobility. However, one of the designers of the GO FlyEase, Sarah Reinertsen, has been very vocal about her pride in the GO FlyEase’s accessibility. Reinertsen herself utilized a prosthetic leg throughout her athletic career, and understands firsthand how few options there are for disabled athletes. When asked about the shoe’s target audience, Reinerstein stated, “I think we’ve been very deliberate in that we might be designing for people with disabilities, but this shoe is for everybody…” From Reinerstein’s perspective, an increase in accessible fashion is obviously a positive. However, marketing the shoe as only for people with disabilities can feel othering. By not being explicit on their website, Nike is able to avoid any sort of labels. Although this may seem to be the perfect middle ground, it has had real consequences for the very people who would benefit the most from the GO FlyEase.

When the shoe launched, it sold out quickly, leaving many who had hoped to snag a pair behind. While this is obviously beneficial to Nike – fast sales mean high demand and profit – it’s prevented real people with disabilities from obtaining a pair. The limited-edition nature of the GO FlyEase has severely reduced the number of people who can obtain the shoe. Some pairs are being resold online, often costing upward of 600 dollars – more than triple the original 120 dollar price tag. Nike also patented the design of the shoe, meaning there’s no comparable product on the market. Thus, the options for people who are disabled and want accessible shoes are once again limited. They can choose to just eat the large price tag, but for many disabled people, that’s extremely unrealistic. Over 25% of all disabled people live in poverty – more than double the rate for people without disabilities. This is largely due to structural factors since many jobs require people to work on their feet for long hours, something untenable for many disabled people. Thus, many disabled people are forced to continue to use the shoes they already have, which are likely inferior to the GO FlyEase. While it had the opportunity to increase the quality of life for many people, Nike had instead opted to prioritize profit – to many people’s detriment.

Although the limited production of the GO FlyEase has certainly impacted a lot of people, it’s more of a symptom of a broader issue within the fashion industry. Physical disabilities are often treated as an afterthought, and the clothing that is made with disability in mind can be unstylish or even condescending. The brands that do exist for people with disabilities that manage to avoid those pitfalls often fall into other traps, such as being expensive. Cur8able, a fashion website that advertises accessible clothing, can often be seen touting clothes that cost upwards of 50 or 60 dollars – an unrealistic price for someone living paycheck to paycheck. The Nike GO FlyEase was supposed to be able to avoid a lot of these issues, likely because it was designed partially by people like Sarah Reinertsen who have limited mobility themselves. If more of the shoe had been available, it would have still been a huge success, both for consumers with and without limited mobility. However, until companies like Nike put the comfort and happiness of people before small profit gains, fashion will remain inaccessible.