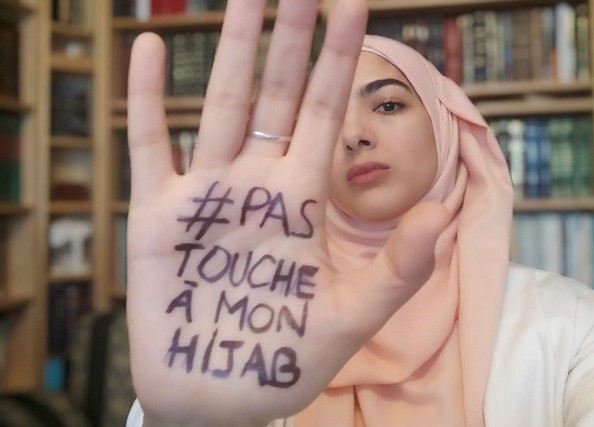 The rules of covering are not explicit in the religious canon of Islam, considering how important of a cultural element it is to the modern Muslim faith. The first ideas of Muslim women veiling come from mentions of the prophet Mohammad’s wives in the Quran and Hadith covering their faces. However, Drew University sociologist Caitlin Killian states that much of the adoption of veiling came from surrounding cultural diffusion rather than inspiration from the Muslim faith itself (“A Brief History of the Veil in Islam”). As Islam spread, groups within the religion also absorbed traditions of surrounding cultures, including women covering their hair in areas surrounding the Arabian Sea. The hijab is a relatively modern phenomenon in Islamic law, and cultural preferences for veiling tend to ebb and flow as times change (O’Donnell). While there are also Islamic rules for men to dress modestly, ancient religious writing such as the Quran and Hadith state that both male and female modesty relate to men’s sexuality. However, just like the preferences to veil, the meaning of a veil has evolved. Certain cultures within Islam may mandate veiling for women, either socially or legally, creating an environment of limited choice in women’s religious expression. However, modern discourse has risen over a woman’s choice to veil: can a woman’s choice to wear a hijab be feminist? 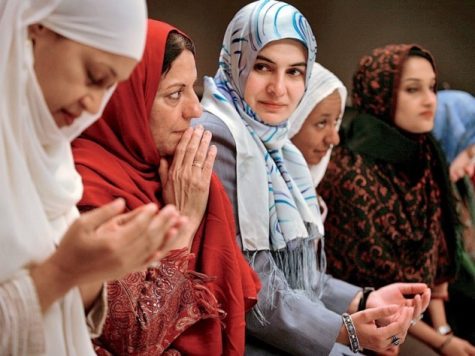 For some Western feminists, Islam does not come to mind when thinking of beacons of feminist thought. Secular European feminists increasingly push narratives of the helplessness of Muslim women, thus victimizing those women themselves. European feminism has a complicated relationship with the world surrounding it. While the women’s rights movement is progressive, participation in it does not exempt one from exhibiting other forms of bigotry (Cetinkaya). Many non-Muslim, white, European women have co-opted feminist arguments to justify Islamophobia through disdain of the hijab.

Feminism has historically been a movement based on the right to choose. The movement for a woman’s right to an abortion has been deemed “pro-choice” rather than “pro-abortion,” as a lack of force for one decision or another is a benchmark of pro-women ideology. Outwardly symbolizing one’s religion is a symbol of choice; for women to have an option to express through physical choice at all is revolutionary. Because of the context of male sexuality and the hijab, as well as forceful rules of the veiling in some Islamist cultures, many western feminists look down on the hijab as nothing more than a tool of oppression against women. Muslim women are deemed as victims that don’t know any better. Some feminist scholars even compare wearing a hijab to choosing to stay in an abusive relationship (Mancini). However, a blind assumption that Muslim women are victims of the men of their faith ignores the possibility of choice. In fact, upon a resurgence of veiling after the Arab-Israeli War in 1967, most women chose to veil as an expression of their faith after a loss (O’Donnell). The automatic assumption and insistence that Muslim women are forced and victimized ends in the maltreatment of these women. It’s not just fringe bigots who believe in these stereotypes about Muslim women; it is feminist leaders and conservative lawmakers. Recently, they’ve been working together. The false victimization of all Muslim women – and thus villainization of Muslim men – has become the basis for anti-choice, sexist, Islamophobic laws. These views masquerading as new feminism have taken well to far-right parties, so much so that nationalist groups have worked to ban veiling in some capacity, often the niqab and burqa, which cover more than the hijab. Countries that currently have some level of prohibition on Muslim veiling include Germany, Austria, France, Belgium, The Netherlands, Italy, Spain, Britain, Turkey, Denmark, Russia, Switzerland, and Bulgaria (“The Islamic Veil Across Europe”). 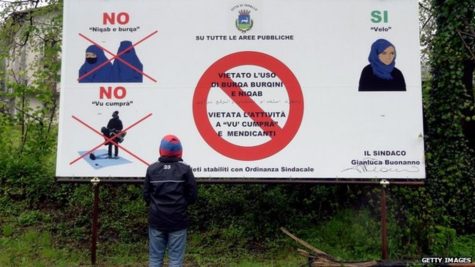 Enforcement of Muslim veiling laws, whether to wear or not to wear, disrupt the religious expression and freedom of women everywhere. The moral dissonance of European feminism comes to light when activism for women requires advocacy for Muslims. Muslim women who choose not to wear a hijab fear association with far-right groups that demonize their religion (Hunt). Muslim women who choose to wear a hijab fear accusations of cooperation in their own oppression and exclusion from feminist spaces (Nawal). However, there doesn’t need to be a mandate or a ban on religious expression. Rather, feminism should support the right to choose the expression of women and their beliefs. Muslim women should not be reduced to the idea of an object manipulated by Muslim men, especially by those who claim to advocate for the expression of the natural strength that all women have.

Gender and Society. “A Brief History of the Veil in Islam.” Facing History and Ourselves, 2003, www.facinghistory.org/civic-dilemmas/brief-history-veil-islam#4. Accessed 28 Feb. 2022.

Hunt, Carol. “Why Is Feminism so Quiet about Muslim Women Who Refuse to Wear the Hijab?” The Irish Times, 21 Aug. 2017, www.irishtimes.com/life-and-style/people/why-is-feminism-so-quiet-about-muslim-women-who-refuse-to-wear-the-hijab-1.3189620. Accessed 2 Mar. 2022.

Stetson Freeman, Melanie. Wearing hijab, Muslim women from the United States and around the world meet in Manhattan in 2006 during the Women’s Islamic Initiative: Spirituality and Equity conference to discuss the issues and problems they face. Harvard Magazine, www.harvardmagazine.com/2011/09/the-veils-revival. Accessed 14 Mar. 2022.

This sign in Varallo says that the Burqa, Niqab and Burqini are not allowed by communal decision. BBC, www.bbc.com/news/world-europe-13038095. Accessed 14 Mar. 2022.